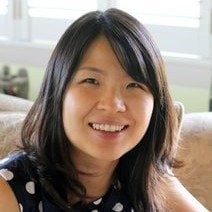 About My Korean Kitchen

My Korean Kitchen is a food blog that talks all about my love and passion for Korean food and Korean fusion food. It includes step by step pictorial instructions, cultural discussions, and product reviews.

My husband suggested that I start some kind of food blog back in March 2006. He often said he had some difficulty finding out about Korean food before he married me. (Back then, there weren’t many Korean food blogs or websites.) So, originally I aimed to help foreigners living in Korea to give them some tips on living and cooking there.

However, over time I learnt that most of my blog readers are actually from outside of Korea, who want to learn Korean cooking and its culture. So my focus has naturally shifted to give more relevant information to those people and share their pain when it’s too difficult to find the source of Korean cooking ingredients.

My Korean Kitchen has been listed by Saveur magazine as one of the 55 Great Global Food Blogs. Also, my work has been featured on various media and publications such as NPR, Fitness Magazine, Today, Huffington Post, ABC Radio (Australia), Lonely Planet, The Independent, Yahoo News, Serious Eats, The Kitchn and BuzzFeed.

I hope My Korean Kitchen becomes “the place to be” when it comes to Korean cooking.

Hi, My name is Sue and I am the author / cook /photographer behind My Korean Kitchen.

I was born and raised in South Korea, and am currently residing in Brisbane, Australia. I spent most of my childhood to young adult life in Korea until I met my Aussie husband.

I had a great exposure to delicious Korean food all the time as I was growing up, because my mum is a great cook and also she ran a restaurant for almost two decades. Although, I didn’t get to learn cooking from my mum much, I tried to observe her as much as I could in her home and busy restaurant kitchen.

While, I haven’t received any formal training in cookery, I love eating delicious food and sharing my culinary adventure with my family and friends.

I hope you try these books to get more insight in Korean cooking!

Also, don’t forget to join my free weekly email newsletter. There are already 15K+ active members in this community!

I welcome your comments and feedback and would love to hear from you. I will strive to respond to your message. You can leave a comment below or use this contact form.