I got an interesting email from one of my readers, Paul, the other day. It was about his food experience in Pyongyang. So naturally it drew my attention as I’ve never been to North Korea before. Have you?

His description about the north Korean cold noodles – Raengmyun (south Korean naengmyun, 냉면) he had was quite descriptive and he also kindly attached some photos for us to share.

The restaurant he visited is called “Okryugwan (옥류관) “, one of the landmarks in North Korea, and is located near Daedong river. 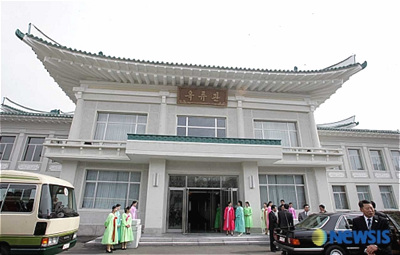 North Korean food is generally known to have a purer and clearer taste than South Korean food. If you are used to the artificial taste of some other food, it might taste quite bland.

Here are some photos of what Paul had and his description about them. Thanks, Paul for sharing your experience with us! 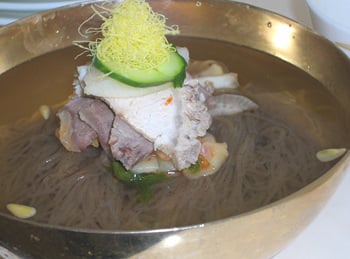 (My note – raengmyun in a brass bowl – Brassware is one of the Korean traditional dishes and it keeps cold food cold and warm food warm. )

The noodles arrived extremely cold and contained a chewy texture. The buckwheat hulls would separate and offered great texture contrast while chewing. The broth was very mild, not salty nor “meaty” flavored but pure and clean.

The mustard and hot pepper condiments are house made. The mustard packed a great punch, but just enough so the noodles natural flavor came through. The red pepper sauce is a winner and combined both sweet and aromatics, one of the best in my memory. Finally vinegar, was just that, white vinegar most likely vegetable as the smell was quite mild.

(My note – I am guessing this is one of the side dishes. It looks like Tangpyongchae, 탕평채 – mung bean jelly with beef and egg topping.)

The many kimchi varieties in Pyongyang tasted to be quite sweet and mild and did not contain heavy amounts of garlic. I learned that this is a Pyongyang characteristic with Kimchi. Truly an eye-opening experience!

If you would like to make some Korean cold noodles at home, try these recipes!