Note: The sale below was a long time ago so is not relevant anymore. However, I still like bulgogi burgers and have shared a bulgogi rice burger recipe at this link.

The other day I went to Lotteria with my friend. (Lotteria is a kind of Burger King.) I haven’t eaten a hamburger for over 1 year. The reason I don’t eat out for hamburgers is first, they don’t use good quality ingredients so it’s not healthy, and second it’s too expensive for the meal.

Anyhow they have released 3 burgers a couple of month ago, and as a promotion they sell those 3 new burger combos all for 4000 won each at lunch time. (Nearly 1000 won off the price, and Lunch Time is between 11am to 2pm).

This is the European Frico Burger Combo – 5000 won (normal price) 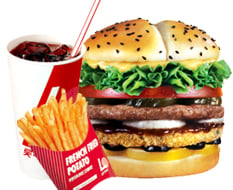 This is the Korean Bulgogi Burger Combo – 5500 won (normal price). This one doesn’t have any chips. 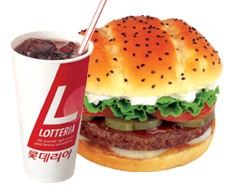 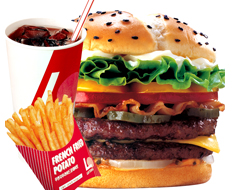 I had the European Frico Cheese Burger Combo for 4000 won, and my friend had the Korean Bulgogi burger combo for 4000 won. We got two free cheese sticks as well thanks to their September promotion event. (If you ordered any of those three burgers, you can get it.)

The burger was a lot nicer than I expected and was very filling too. The cheese was especially nice. Apparently it’s a natural cheese from Holland. Whenever you buy a soft drink such as coke, sprite etc. (included with these combos) and eat in, you can get unlimited refills free of charge.