We have a regular gathering with some other foreigners living in this area every second Wednesday. We have dinner in one person’s house and we take turns. The host prepares a main meal and everyone else brings their duty dish. Anyhow, Mel (most of the time dessert duty person) brought this cheese cake at the last gathering, and since then I fell in love with it. She usually brings home made dessert, but she brought frozen cheese cake that day. (She mustn’t have had much time to cook.)

Not realizing that it was from Homeplus, I kept saying how delicious it was and I wanted to have some more, etc. Michael was surprised because it is a very unusual comment for me to say something like that for a dessert. Because most of the time desserts are just too sweet for me. I guess most Canadians and Americans can cope with it, because I know they keep helping themselves until it is all gone. Yet I’ve never finished one piece of dessert ever so far, I usually pass mine on to Michael (When I think I am done). So I guess, me saying that I want more of this cake could have hurt her feelings.

After knowing where she got it from, we eagerly looked for the cheese cake when we went grocery shopping at Homeplus the other day. When we found it, I nearly fainted because its price was so high.

It was 15,950 won (US $17) for that smallish medium size cake. Come on! It is not even a bakery made cheese cake, it is just a frozen cheese cake from the factory. Michael encouraged me “Not” to buy it because of the ridicules price. So I gave up.

When I came home from shopping, I was thinking about the cake more and more. I become a slave of it. So what!
Yes, I finally bought cheese cake yesterday. Michael found out about the fact near the cash register, though he couldn’t convince me not to buy it anymore. This is a picture of cheese cake I was craving for days and days. 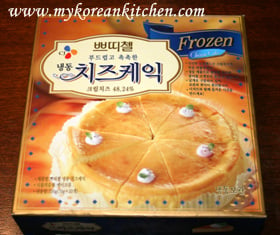 The pieces are individually packed as usual for Korean snacks. 🙂 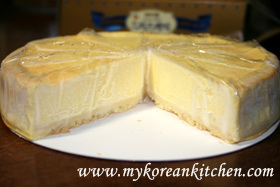 I took out 4 pieces to have (2 each), and Michael said that he finds frozen cheese cake tastes better, so we decided to defrost 2 pieces, and eat 2 pieces of frozen cakes. It was OK to have frozen cheese cake though it was a bit too hard to break it with a fork and hard to taste the cheese. He added the comment later that he likes frozen ones better because he doesn’t like the creamy taste. Dude! If you had mentioned that part I would have waited 30 minutes for both. The picture just below is a piece of frozen cheese cake. 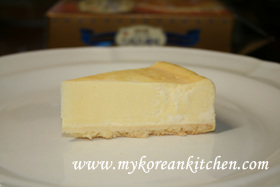 After waiting 30 minutes to taste a defrosted piece at room temperature, I added some strawberry jam on top and tasted it. It was fabulous. It was very creamy and soft, a little bit sweet from the strawberry jam, it was the best cake ever. (We don’t have many good cakes in Korea. 90% of cakes are sponge cake and are all sweet as far as I know.) 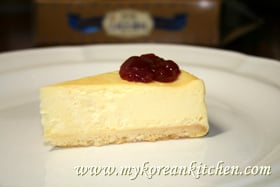