There are a few different varieties of Korean fish sauce.

Korean fish sauce is typically used in Kimchi making to accelerate the fermentation process. On some occasions, it is also used in Korean side dishes and soup/stew to give extra umami.

This is the picture of anchovy sauce I normally use. Anchovy sauce is made of fermented and simmered anchovies and it is a light brown liquid. 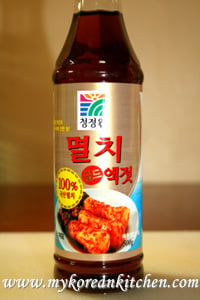 Update: Please refer below to Chris’ comment (Mar 20, 2007), which contrasts the Korean anchovy sauce with other kinds of anchovy sauce (e.g. Thai fish sauce). I cannot verify whether the information is correct or not, however, it might give you some sort of guidance when you are choosing one.