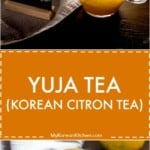 Learn how to make one of the most popular Korean teas – yujacha (yuja tea or yuzu tea) at home!

This Korean citron tea is made with exotic yuja fruit. The tea has a distinctive aroma and is delicious and comforting. A perfect drink for winter. (But really, for any other seasons!) 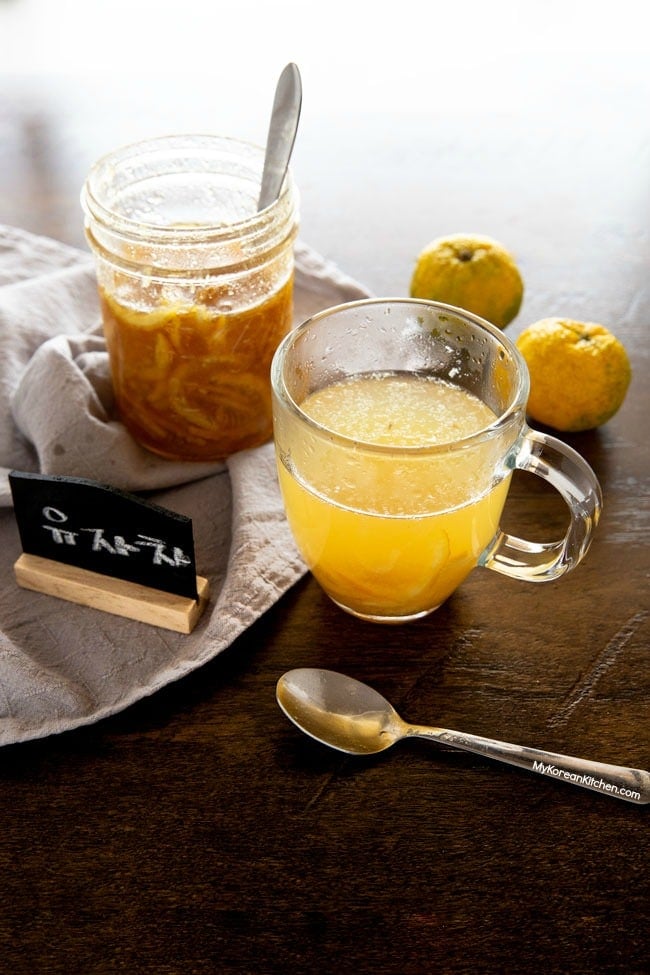 You make the tea by simply diluting 2-3 teaspoon worth of yuja-cheong in a cup of hot water.

You can also combine it with ice cubes and sparkling water and make some refreshing honey citron iced tea. It is one of my favorite summer drinks.

The tea has a sweet and slightly sour taste, as well as a bitter sweet taste. Yuja is known to be rich in vitamic C and citric acid, so it is used as a herbal remedy to fight colds in Korea.

WHAT IS YUJA (YUZU FRUIT)

Yuja (유자, also known as yuzu) is a type of citrus fruit which originated from central China and tibet area.

Nowadays, it is mostly grown in China, Korea and Japan, though according to this Korean encyclopedia, Korean grown yuja has thicker skin and stronger fragrance than its counterparts.

Yuja looks like a smaller version of yellow grapefruit, but with more uneven skin. As for the taste, it is tangy, tart and bitter sweet – like lemon, mandarine orange and grapefruit all in one.

Yuja is most commonly used in marmalades known as yuja-cheong (as mentioned earlier) in Korea. Once you make yuja-cheong, you can easily transform this ingredient into a herbal tea, a dressing (e.g. yuzu sauce) or a dessert flavorer.

Finding yuja isn’t an easy task for many people. (It wasn’t easy for me either! I had to drive 3 hours – one way, to visit a yuja farm in a nearby state. Even then I considered myself lucky.)

The quickest and easiest alternative solution for fresh yuja is buying a bottle of yuja-cheong from your local Korean, Asian grocer or Amazon. It is quite easy to spot in the tea section isle. Obviously, all the hard work is already done for you in this case.

But if you love a DIY method and are unlucky with sourcing the yuja fruit, you could try using meyer lemon instead. (If you want to learn about the difference between the regular lemon and meyer lemon, read about it from here.)

While it won’t give you the exact same taste as yuja, you can certainly mimic the taste. I’ve made the tea with my home grown meyer lemons before and the taste was just as good. On a bonus side, meyer lemon tea wasn’t as bitter as true yuja tea.

As I mentioned briefly already, to make yuja tea you need to make the tea base, yuja-cheong (yuja marmalade), first.

This process starts with thoroughly washing and drying the yuja. As you will be eating the peel of the yuja, you will want to scrub the skin very well. Many people use bi-carb soda and/or coarse salt to aid the cleansing process.

Then slicing the yuja fruit the right way is the next important step.

I noticed that many people like to thinly slice the whole fruit (vertically) and only separate out the seeds as you slice it. But, I like to prepare yuja by segmenting it. Why? Because the tea tastes better in my opinion. I will elaborate shortly after explaining the steps involved first.

As you can imagine, this process is a bit more labor intensive than how most people would prepare yuja, but I think it is worth it.

Why? That’s because the white pith gives a really bitter taste. I can generally tolerate mild bitterness of any food but when I made some batches of yuja tea leaving the white pith on, the tea was very unpleasant to drink because of its bitter taste.

So if you’re as picky as I am and don’t think you can tolerate a bitter tea, I recommend you to remove white pith of the yuja following the steps above.

Earlier on I mentioned that, typically yuja-cheong is made with yuja, sugar and/or honey at 1 to 1 ratio.

After doing 5-6 rounds of testing, it turns out that, my preference is using 100% white sugar rather than using other sweeteners (e.g. raw sugar, honey or coconut sugar). My second preference being raw sugar. 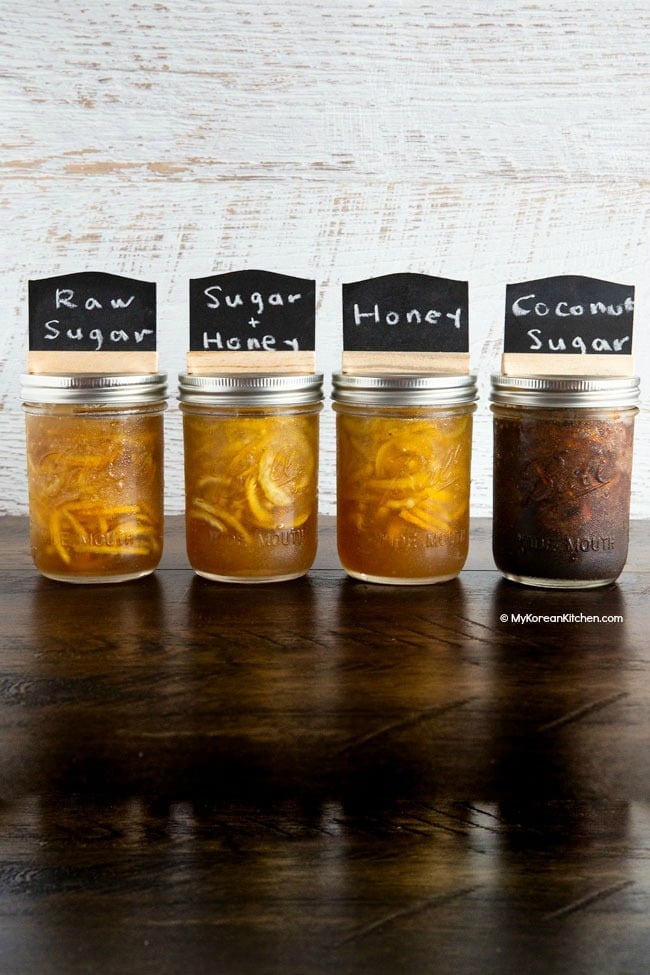 I was actually surprised by this because in general, I try to use less processed sugar and go with more natural forms of sweetener.

What I liked about using white sugar is that it did not overpower the citron flavor. Also, the color of the tea was about right when I served it.

I know some people might choose honey instead of sugar. But you will find that the flavor and the fragrance of honey is a bit overpowering, so you might not appreciate the natural fragrance and flavor of the citron.

Of course, if you don’t mind about all these, by all means go for it. You can even do 50% sugar and 50% honey. Or at different ratios. I didn’t have enough yuja to test all these variations. 🙂

Another thing worth mention is that, while I was researching for “healthy sugar”, I discovered coconut sugar that’s been praised for its health benefits by many health websites.

But to my disappointment, coconut sugar was by far the worst substitute for sugar or honey in this recipe as far as the tea taste is concerned.

It tasted more like a medicine! Do you get the picture?

If you used an alternative form of sweetener for this recipe, please share what you used and how it turned out. We’d love to know!

Now onto the recipe.

1. Sterilize a glass jar in a pot of boiling water. 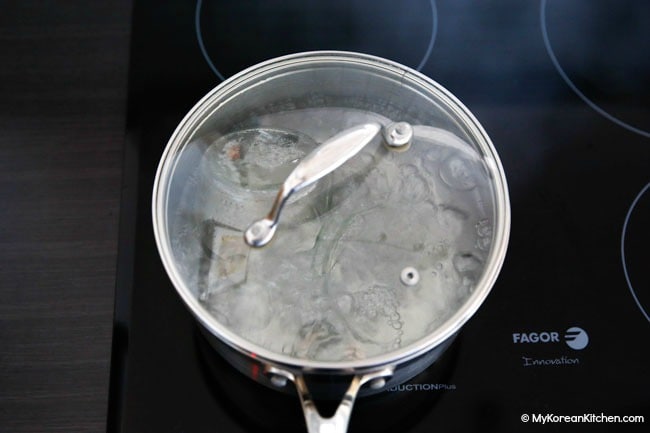 2. Rinse the yuja fruit in running water. You may use bi-carb soda and/or coarse salt to scrub the yuja skin. Pat dry yuja with some paper towels. 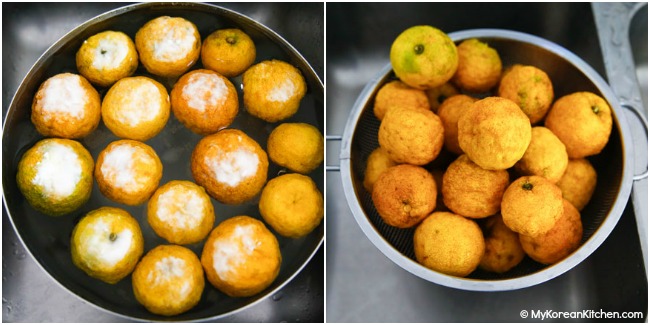 3. Separate the yuja – rind, pulp and juice, pith and seeds. Discard the pith and seeds. Thinly slice the yuja rind in even shapes and sizes. If you need more tips on this step, refer above “Tips for Preparing Yuja for Marmalade”. 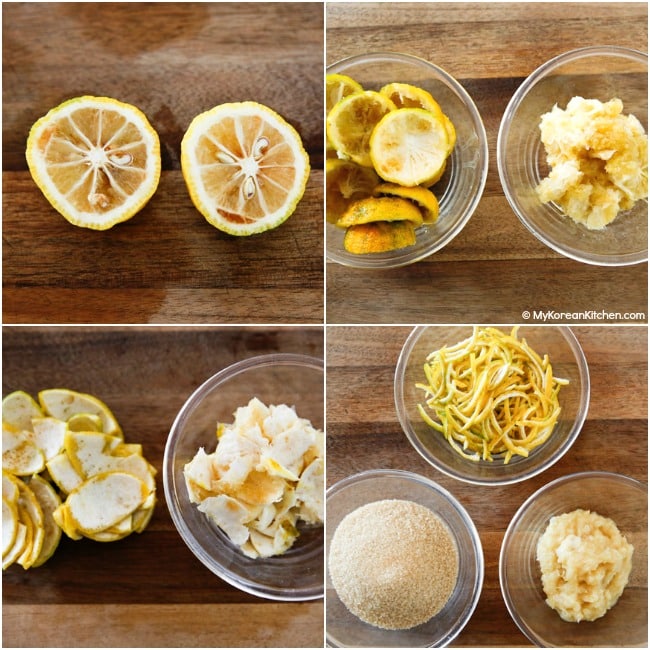 4. Blend the yuja pulp and juice (but not the rind) in a mixer or blender. (Depending on the volume of yuja-cheong you’re making, you may need to use a handheld blender instead). 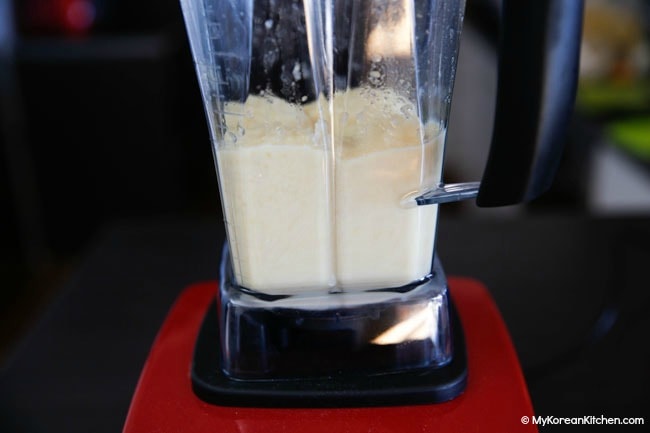 5. Combine the blended yuja with sugar in a clean bowl and mix them well. Place the sliced yuja rind in the sterilized jar then pour over the yuja and sugar mixture. Stir with a clean teaspoon. 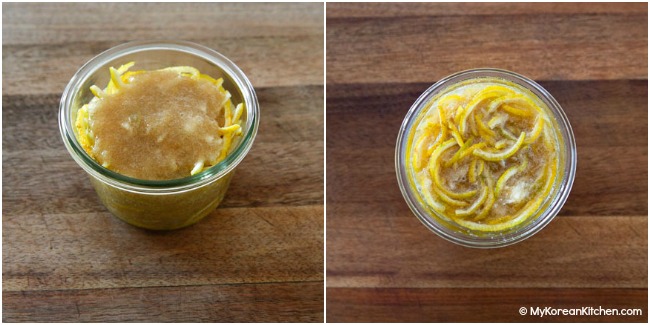 6. Close the lid and sit the jar at room temperature until the sugar dissolves. Depending on the volume, it may take a few days to dissolve all the sugar. During this time, stir the yuja-cheong using a clean teaspoon everyday.

7. Transfer the jar into the fridge until used up. The marmalade taste improves as times goes by. (i.e. It tastes better from week 1 to 2 of making it. Also the subtle bitterness improves from week 3 of making it.) 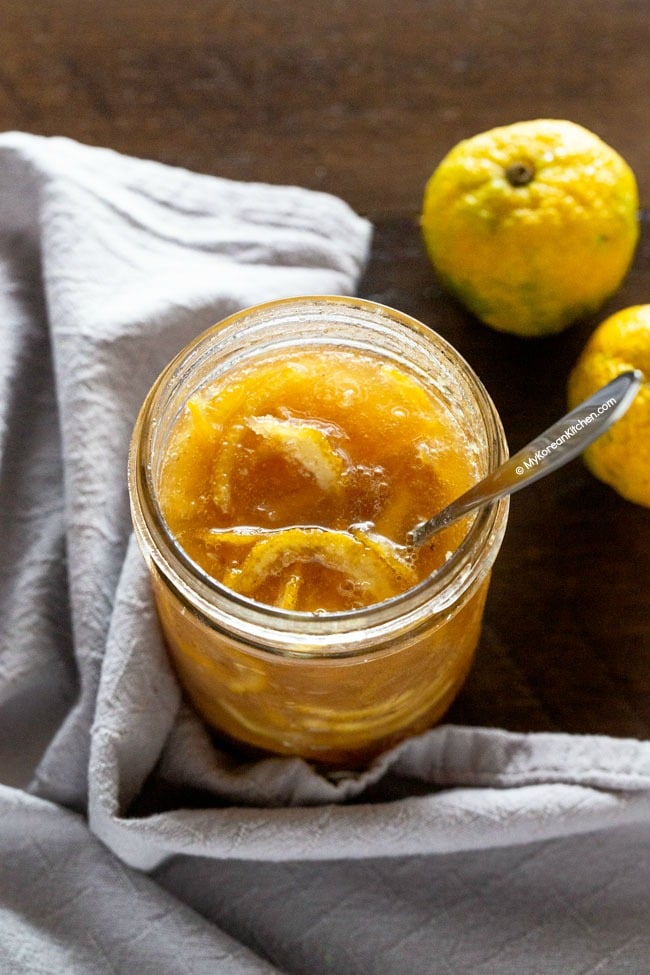 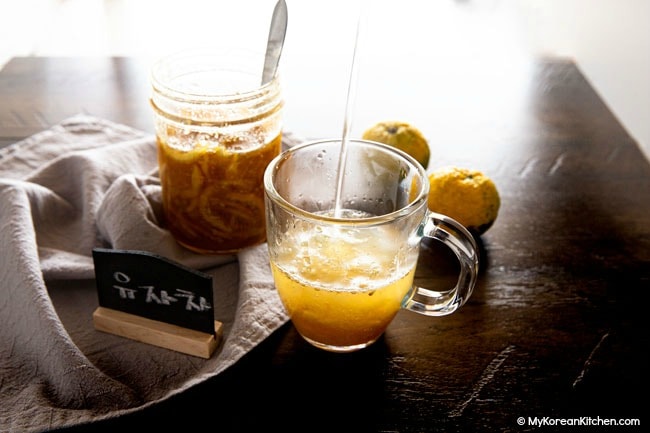 As long as you sterilized the jar properly, you should be able to keep the marmalade in the fridge for up to two months. 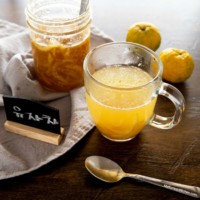 Tried this recipe?I love hearing how you went with my recipes! Rate this recipe with a comment below and tag me on Instagram @MyKoreanKitchen.
1.1K shares

Filed under: Korean Drinks, My Recipes
Tagged with: tea, yuzu

Toowoomba Pasta (with a Korean Twist)