I remember buying some rolls of Kimbab couple of years ago.

There was a shop called “Kimbap Nara” (김밥나라) and they sold Kimbap for 1000 won (About US $1 that time). It was so sensational because it was so cheap.

Kimbap used to be 2000 won for the cheapest one in those days. So everyone lined up to get this cheap Kimbap at Kimbap Nara. Sometimes I had to wait for about 10 minutes or more. But still everyone was so happy that they could get some Kimbap so cheaply, so Kimbap became more popular as a simple meal or snack. Before that time, it was only a special picnic meal.

Anyhow, as the shop got popular, lots of other similar shops opened near the Kimbap Nara. In the town where I live, we have 3 Kimbap shops on the same street about 25m away from each other.

These three franchises are what we have in this town and are the most common franchises in Korea. 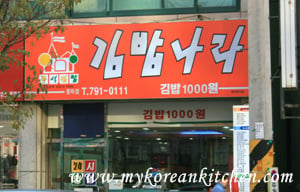 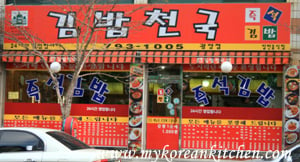 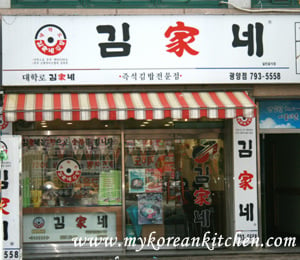 They all have similar menus, especially the first and second one. But Kim-ga-ne is a little more expensive than the other two shops, and its food quality is better. Ever since I visited Kim-ga-ne I haven’t been to Kimbap Nara nor Kimbap Cheonguk. I like tuna Kimbap best from Kim-ga-ne.

I wanted to talk about these cheap Korean style fast food shops for a long time, but I just couldn’t dare to mention them. Because, simply, their menus are just too much. There are about 70 items on each menu. However, yesterday, Mary from maryeats pulled the trigger. She named all the menus from Kimbap Nara in Korean and English, the prices, and also simple but descriptive descriptions. I was simply amazed with her effort. It will be very useful if you are living in Korea, if you are not, just be jealous. 🙂